1. Using the CueSight to Perfect Your Stroke

The primary benefit of the CueSight to the beginner and pro alike is how it can help you perfect your stroke.

Frankly, it doesn't take long for a player to learn how to aim. Once this skill is acquired, only STROKE and STRATEGY separate the novice from the professional. The CueSight crosshairs on the cue ball give a visual feedback on the straightness of the player's stroke.

Any dip or twist will be revealed by the crosshairs. With a perfect stroke, the crosshairs will remain fixed in the "strike spot", narrowing in on that point as the cue approaches the cue ball. Obviously, the idea is to keep the crosshairs motionless throughout your stroke to eliminate the possibility of mis-cueing or striking at an unplanned angle.

2. Using the CueSight to Aim

To sink a shot, any professional will tell you to imagine the cue ball in contact with the object ball at the correct point to sink it. This is commonly called the "ghost ball theory". The tough part lies in getting the cue ball to that spot!

By lowering the butt of the cue from your normal shooting position, and perhaps raising the shaft slightly, depending on your technique, the vertical line of the crosshairs will illuminate not only the cue ball, but positions "down table" as well. For a straight-in shot, you want to have the top portion of the vertical line illuminate a position in the center, left-to-right, of the object ball. For cut shots, you need to shift this to the side to compensate for the roundness of the balls. To go to the extreme, let's imagine that a ninety-degree cut shot was possible. It is, in fact, impossible, but it is the upper limit. That is to say, an eighty-nine degree cut shot is theoretically possible. In this scenario, you would want to have the top part of the vertical line of the crosshairs illuminate a point exactly one ball's width to the side of the center of the object ball, from your perspective. This point may be on a rail or on another ball, but from your perspective, the distance left-to-right will be the same. Once the left-to-right alignment of the cue is established, the cue is simply returned downward into shooting position to make the shot.

Using the CueSight as an aid, it will not take a shooter long to master their aim. Once that is accomplished, strategy and stroke are the only two challenges to overcome to become a perfect player.

3. Using the CueSight to Properly Cue 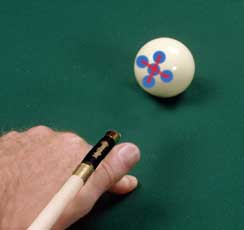 Once you have your aim and your stroke down pat, strategy is the next hurdle to overcome. Games are won and lost based on strategy. One element of this is cueing the ball so that the final resting position of the cue ball is controlled.

By hitting the cue ball off-center, you can influence it to come to rest in a position other than where it would if you were to just hit it dead-center. By controlling your "leave", you can either set yourself up for an easy second shot, or place the cue ball in a spot that would make it difficult for your opponent to sink a ball.

The CueSight crosshairs shows the exact position the cue will strike the ball. Using this, and knowing where you need to hit the cue ball to reach the deisred effect, you can drastically improve your game. Beginners note, however, that with a flawed stroke or poor aim, "English" as it is called will be of no use to you.

There are three types of English: the draw shot, the follow shot, and "side". Side is sometimes referred to as left or right English. English is accomplished by hitting the cue ball at a position up to, or beyond, one cue tip's width from the center of the cue ball. Note that the further you stray from the center of the ball, the greater the effect of the English, and the greater your chance of mis-cueing, yielding disastrous results!

A draw shot is made when the player hits the cue ball at a point below center. This will make the cue ball have a tendency to roll back toward you after contacting the object ball.

A follow shot is the opposite, occurring when the cue ball is hit above the centerline. After impact with the object ball, the cue ball will tend to roll forward after impact, at an angle determined by the degree the shot was cut.

Side, or left or right English, is when the player hits the cue ball to the left or the right of center. This imparts spin on the cue ball and object ball, causing them to deviate from the paths a "normal" shot would cause.

Since the CueSight shows you exactly where you will hit the cue ball, practice will show you what works for what shots.